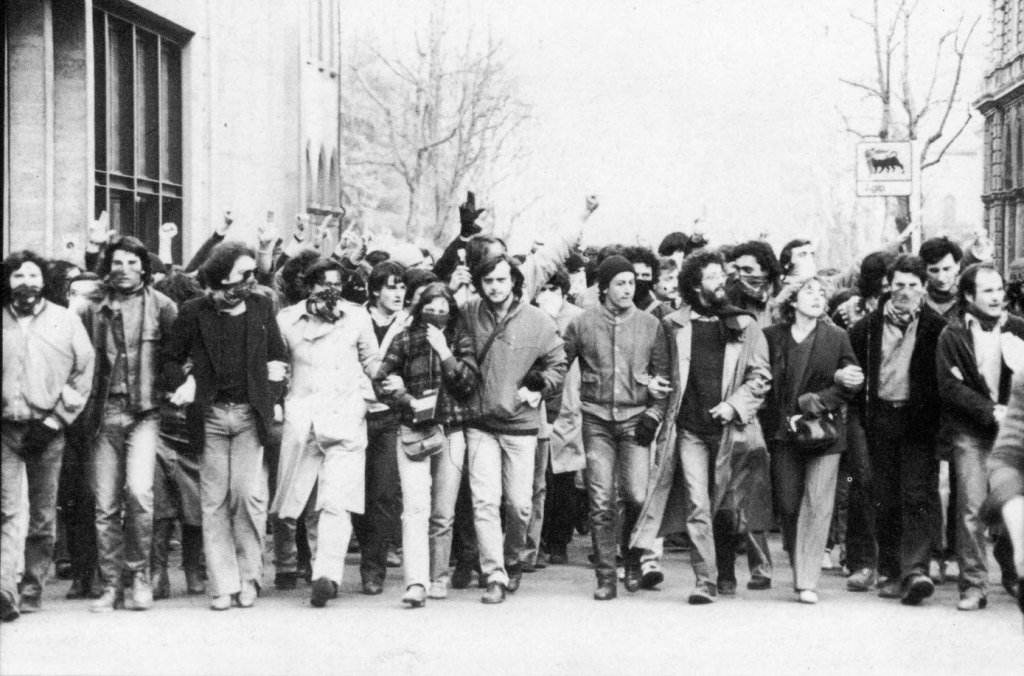 Presentation at the Amsterdam conference What is Post/Autonomia Today?, 19 may 2011

The immediate occasion to give rise to this presentation, is my attendance to a European gathering of University Struggles, that took place in Paris, in February 2011. With students and researchers coming from all over Europe, in fact from all corners of the world (including Japan, Argentina, Canada, and Tunisia), the gathering was one of the most promising recent developments in terms of international political activism. The meeting was called by Edufactory, a global network of activist scholars, engaged with knowledge production and university struggles. The activism of Edufactory, as the name of the network makes abundantly clear, is informed by post-operaist theory and is explicitly couched in its language. The main convener of the meeting was the Italian branch of the Edufactory network (not without internal fissures of its own), which in terms of political alignment, sides itself with the work of Antonio Negri.

In the grim, proletarian architecture of the university of Saint Denis, I attended a crowded workshop where after much deliberation, the main theoretical principles of Edufactory were explained. We were told that these were facts:

a) that knowledge is a commodity

b) that the distinction between public and private universities has collapsed and become obsolete.

c) that the university is no longer a site for emancipation, since the subject of the student is equal to that of the precarious worker.

It was rather puzzling to me, a person who tends to see all these “facts” as the unstable outcome of political conflict. Indeed, what is striking about these propositions, is that they oppose quite neatly all the major demands of the present student movements: a) against the commodification of knowledge, b) against the privatization of the university and c) against universities for the rich, the restriction of university access to those with higher incomes.

What is more, these propositions seem to also contradict commons sense. No one can tell us with a straight face that an illegible paper on Deleuze’s “becoming animal” and its relevance for “the politics of meat eating in Bangalore” is somehow useful for capital, or that society is somehow in need of that kind of commodities. The utter uselessness of culture that Adorno wrote about, though admittedly in decline, seems to still be of relevance here. Anyone present in this room, at this conference, knows that there is a degree of relative autonomy in the university: it is what makes radical research and theory possible in the first place.  Similarly, the idea that “public and private universities are two sides of the same capitalist coin,” is an unhelpful simplification. Of course, the Thatcherite politics of inserting business management techniques into the public sphere have had their impact. But public and private spheres are not the same, as only the height of the college fees show: their different logics should not be ignored. And finally, the idea of the student subject as a precarious worker seems to be relevant for Italy and Spain, but not for the Netherlands, where the labour market still welcomes students with open arms. Indeed it is questionable, whether the conflation of chain- and brainworkers, that is hidden under the label of the precarious subject, aka the precariat, is even tenable in Italy itself.

What is important, is that these positions are not mere aberrations; they have deep roots in the operaist tradition, and can be traced back to the debate around the ‘autonomy of the political’, that antagonised Mario Tronti and Antonio Negri in the sixties and let to the rift between operaism and post-operaism which resulted in Autonomia Operaio as an instance of the latter. The foundations of the idea of the autonomy of the political are to be found in the very core of the operaist tradition, the idea that workers’ struggle drives history and not capitalist development, hence the primacy of political action. Tronti’s conception of politics departed in significant ways from what he termed ‘vulgar Marxism’: taking from Max Weber and Carl Schmitt the idea of political struggle as a clash of values and identities, rather than the Marxist idea of class struggle based on social contradictions. When this position was taken to its logical extreme, the autonomy of the political became the pretext for Tronti’s return to the bosom of the Italian Communist Party.

Negri has been a persistent critic of Tronti´s line, which he rightly equated with “the ideology of Historic Compromise”. Therefore it is no surprise that we read in Empire, that “any notion of the autonomy of the political” has disappeared, and that “the notion of politics as an independent sphere” has “very little room to exist” in our present situation where “consensus is determined more significantly by economic factors” (p307). Negri in stead, opts for the other extreme, where the political is completely subsumed in the economic. Hence the absence of an outside, the collapse of the distinction between public and private, hence Empire as a ghostlike, ubiquitous and centerless phenomenon, the struggle as immanent to the capitalist mode of production and the university as a factory that produces commodities.

What is essential to understanding this Manichean opposition regarding the nature of the political, is the performative nature of the operaist tradition. As Tronti suggested himself, the principle idea of operaism, that the course of history is decided by workers struggle rather than the laws of capitalist development, had a performative rather than an informative purpose: it aimed to create the very climate for fighting against pessimism and subalternity and for placing the workers at the centre of history. Not only the politics of workerism, but the very understanding of reality is prefigurative, as much with Tronti as with the messianic writing of Negri, where the revolutionary qualities of immaterial labour and the multitude fulfil an equally important ‘performative’ function: to wish a reality into being.

This core feature within operaism and postoperaism of the performative escape from pessimism and subalternity, resonates strongly with Gramsci’s critique of mechanical determinism as a form of fatalism, what he called the clothing worn by a real and active will when in a weak position of subalternity:

“When you don’t have the initiative in the struggle and the struggle itself comes eventually to be identified with a series of defeats, mechanical determinism becomes a tremendous force of moral resistance, of cohesion and of patient and obstinate per­ severance. “I have been defeated for the moment, but the tide of history is working for me in the long term.” Real will takes on the garments of an act of faith in a certain rationality of history and in a primitive and empirical form of impassioned finalism (or teleology) which appears in the role of a substitute for the Predestination or Providence of confessional religions.”

The problem of fatalism as a religion of resistance according to Gramsci, is that the moment the subaltern element moves beyond the defensive point of resisting a will external to itself, and in stead becomes an agent of history, it has to take the initiative. At that point, mechanical determinism becomes a cause for passivity and self-sufficiency, revolutionary optimism leads to its polar opposite: pessimism. This is the famous problem of the passion pendulum of the workers movements swinging between optimism and pessimism. Ironically, Tronti’s struggle with mechanical determinism led him back to the politics of accommodation of the PCI.

And even more ironically, Negri’s continuation of the postworkerist tradition led him back to mechanical determinism by other means. By replacing ideology with ontology, and introducing workers subjectivity as a new revolutionary teleology, by positing neoliberal globalization and state retrenchment as historical inevitabilities, Negri has devised a new and complex form of fatalism, where the final victory of global capitalism carries in its belly the promise of a community to come.

The postoperaist attack on Tronti’s reformism took the form of a new and evermore powerful economism. Social reproduction, language, culture, art, politics, education, evermore spheres that traditionally were conceived as relatively autonomous from capital, are now re-inscribed in its parasitic logic, with postoperaists thus paradoxically embracing the advancement of neoliberalism as a necessity for liberation.

What we are left with, is an inability to think of an outside, even in negative terms as a form of unemployment: a material and subjective reality that is manifesting itself prominently these days on the squares of Spain. An outside, as a global south, only partially integrated into the global capitalist circuit, such as Egypt or Tunesia, revolts which are simply explained away through a Eurocentric idea of postfordism and precarity. Moreover, the idea of Empire as a power without centre, leaves us unable to think the Wallersteinian logic of center and periphery that has reared its head again in the Eurozone, with the reassertion of German power and the imposition of IMF austerity on Greece and Ireland.

What we are left with is the impossibility to grasp the nature of politics and the political, to grasp the nature of the contemporary nation state, and more specifically, the impossibility of understanding a country ruled by Berlusconi, of a political apparatus controlled by the mafia, since according to Negri, an understanding of the state does not exist, and does not need to exist. The solution is to simply wish it away.

This is not to advocate a return to a politics of conquering state power, as I don’t expect that such a project would solve our problems. That would be naïve. Nevertheless, there is a need to acknowledge state power and intervene in its contested domain if we are to wrest autonomy from it. When it comes to the university, a theory that reduces everything to the forces of production, can only understand knowledge as political if it is understood as a commodity or as a common.

For this reason, we must rework our analysis of the state and the public sphere and return to a concept of relative autonomy.

Else, the pursuit of the commons threatens to become a new way of the imperative of Voltaire to cultivate ones garden; a community garden, but still a garden.

iThere are no comments