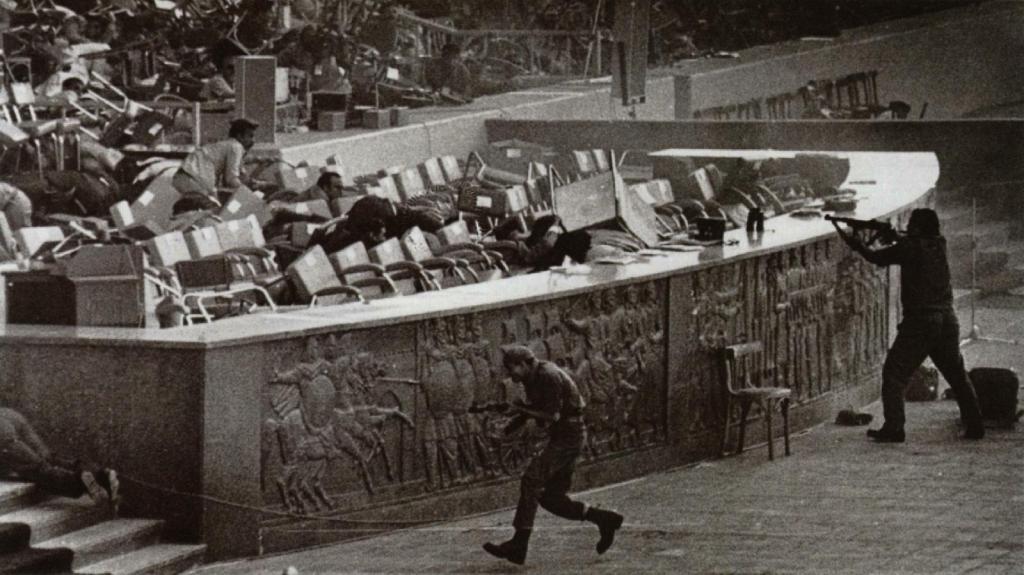 If we look at the gruesome assault on the offices of Charlie Hebdo primarily as an attack on freedom of speech, the natural response is an all-out defence of freedom of speech. From that perspective, we can happily establish that the terrorists have failed. The satirical imagery they sought to violently repress has become iconic. It has circulated in large quantities all over the globe, reaching a wider audience than ever before. The name of Charlie Hebdo, once a marginal magazine struggling to survive, rings louder than ever before.

If that was the primary objective of the assault, it has proven to be rather counterproductive. And we have to wonder whether that effect wouldn’t have been utterly predictable to those involved in planning the attack.

There is another perspective on the Charlie Hebdo assault, which doesn’t suffer from this problem of predictable opposite effects. Juan Cole, a well-known expert on Middle East affairs, portrays the events as inspired by a strategy aimed at polarization. An attempt to create the semblance of a civilizational conflict, in which the West and the Islam come to oppose each other as two monolithic blocs. Thus giving the attackers the possibility to profile themselves as the frontline of the entire Muslim world, and win more hearts and minds for their sacred war. Juan Cole describes this strategy as the “sharpening of contradictions”.

Of course, jihadist groups such as Al Qaida or IS are dependent on Muslims for their recruitment campaigns. Indeed, tiny minorities of western Muslims turn to the jihad, but the overwhelming majority is not interested in jihadism. Most Muslims aren’t even interested in politics, let alone political Islam or islamism. That is especially the case for French Muslims, the largest Muslim population of Europe, of which only one third in the polls says that they are interested in religion. This disinterest functions as a blockade for the attempt of jihadist groups such as Al Qaida and IS to indoctrinate Muslims with their radical ideology. However, if a strong climate of islamophobia and hatred towards Muslims were to exist in Europe, if the West could be lured into an open war with IS in the Middle East, then the conditions would be more conducive for recruiting Muslims based on their religious identity

The strategy of the sharpening of contradictions – in short, provoking your enemy in the name of a larger religious or ethnic group and thus polarizing the population – can be retraced to modern islamist ideology, and its particular innovations with regard to Islamic doctrine. Sayyid Qutb, the intellectual figurehead of the Muslim Brotherhood, argued that western influence had created a state of false consciousness in muslim countries, both amongst elites as among the wider population. Qutb called this jahiliyya, a concept from the Koran that refers to the condition of the Arabic world before the arrival of Mohammed: a state of unbelief. The jahiliyya doctrine legitimized rebellion against political elites in the Muslim world. And it gave rise to strategies to awaken the muslim population from their state of false consciousness through violence.

One of the young members of the Muslim Brotherhood, Ayman al-Zawahiri, would develop these ideas further. He was part of the group Islamic Jihad that assassinated the Egyptian dictator Sadat in 1981. The goal was to mobilize the people of Egypt. But the people didn’t rise and Zawahiri had to flee. He continued his activities in Afghanistan as part of the Mujahideen, where he met Bin Laden and became his mentor. The Al Qaida franchise they set up, pursued a similar strategy.

Fawaz Gerges, prominent Middle East expert at the London School of Economics, has described 9/11 as a similar attempt to awaken the Muslim community from its slumber. In a secret letter found in Al Qaida computers seized in Kabul –Zawahiri states that Al Qaida had decided to escalate the fight with “the biggest of criminals the Americans,” to lure them into open battle in the Middle East. The hope of Bin Laden and Zawahiri was that the passive Muslim population would react in similar fashion as had happened during the Russian invasion of Afghanistan. The goal was to generate a geopolitical crisis, by provoking the US into action. American attacks on Muslim countries would reinvigorate the war-worn and fragmented jihadi-movement, and give it new legitimacy in the eyes of the wider Muslim population.

Of course, the US did not fail to live up to their expectations, even if they would eventually come to very similar conclusions. In 2004, a task force headed by Donald Rumsfeld investigated the causes of radicalism and terrorism. The report stated that “American direct intervention in the Muslim World has paradoxically elevated the stature of and support for radical Islamists, while diminishing support for the United States to single-digits in some Arab societies. Muslims do not hate our freedoms, they hate our policies.”

Al-Qaeda in Iraq, originally led by Al-Zarqawi, successfully implemented a similar polarisation strategy in Iraq. Constant attacks on Shiites and their religious symbols – eventually continued by IS – led to the violent expulsion of a million Sunnis from Bagdad. This brutal and genocidal strategy proved successful: IS was able to position itself at the helm of the entire Sunni community, even if they were the ones to instigate the conflict in the first place.

And the strategy still continues. As a recent piece in the Atlantic states: “The provocative videos, in which a black-hooded executioner addresses President Obama by name, are clearly made to draw America into the fight. An invasion would be a huge propaganda victory for jihadists worldwide: irrespective of whether they have given baya’a to the caliph, they all believe that the United States wants to embark on a modern-day Crusade and kill Muslims. Yet another invasion and occupation would confirm that suspicion, and bolster recruitment. “

The only effective answer to this manipulative tactic, according to Juan Cole, is to not give in to primary impulses: to blame the entire group for the actions of a few; to refuse to carry out identity politics reprisals. In other words: to resist the temptation to place the entire muslim population under suspicion and thus contribute to polarisation. The only effective strategy is to keep the jihadists marginalized.

The problem however, is that there is group in the West that is equally determined to aim for polarisation. The tradition of so-called islamcriticism that has developed in the West, islamkritiek in the Netherlands, has as its defining feature, that it blaims the islam as such for the terrorist acts committed by Al Qaida en IS.

This position is not only untenable, given the diversity of the Muslim world, it is also counter productive. It legitimizes the claims of jihadists that they represent the true Islam. It strengthens the image of a civilizational conflict between the West and the Islamic world, an image that jihadists actively use in their recruitment campaigns. It is exactly the response that organisations such as Al Qaida and IS would like to see.

The most outspoken voices demanding freedom of speech, generally demand the freedom to criticize Islam. The question is not whether they should be legally allowed to do so. The question is whether it does anything to break the cycle of polarization and violence that attacks such as that of Charlie Hebdo, are meant to achieve.