Along a twelve hundred meter stretch of Amsterdam’s southern ring road, a business park is being developed, Zuidas (South Axis), the Netherlands’ new prime business location. Billboards of building companies with promising presentations of what the near future has on offer stand amongst the ghostly lit cement skeletons of newly constructed office towers.

Amsterdam started branding itself in the eighties, through the now largely forgotten Amsterdam Heeft ‘t campaign. It appealed in popular slang to existing residents of Amsterdam, instructing them to become proud ‘sellers of the town’. […] 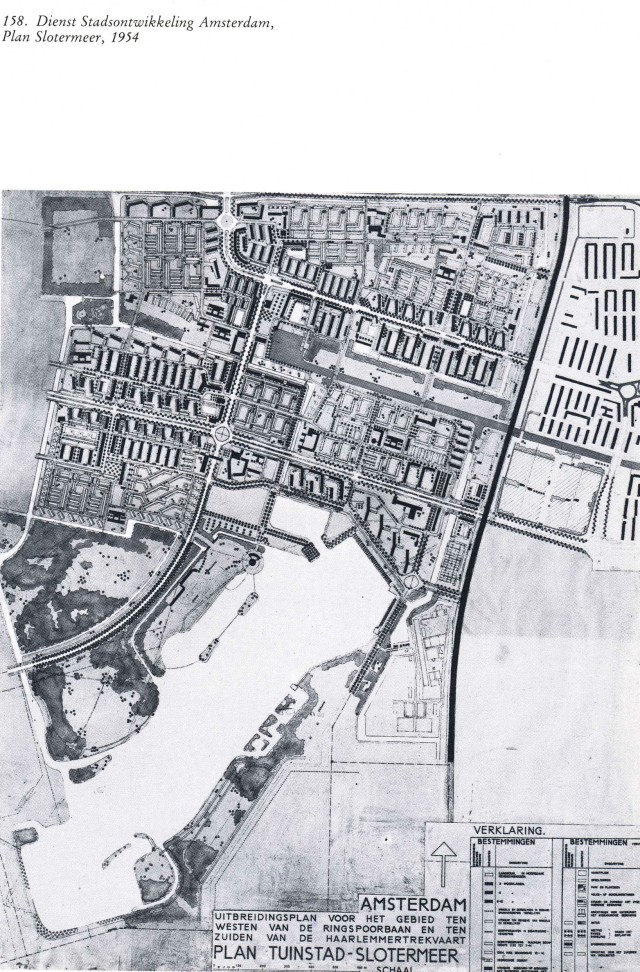 For almost fifteen years now, the area to the west of Amsterdam’s ring road has been subject to large-scale redevelopment, in what is considered to be Europe’s biggest urban renewal program. The district called the Westelijke Tuinsteden (Western Garden Cities) has been built on the basis of the modernist General Expansion Plan of Cornelis van Eesteren. Presented as an advanced, modern living environment for the new Man, the area’s reputation has long been in decline. It’s image changed into that of a backward neighborhood, a ‘concentration area’ marked by segregation and social issues. The architecture has generally been seen as intrinsic to these problems, leading to the present large-scale demolition. Though officially the renewal program is supposed to protect the Garden City qualities of the area, in reality the restructuring lacks any coherent vision of what that would mean. Ironically, some of the same mistakes of the modernists planners are now being repeated, most notably the fixation on form in stead of the social use of space. This essay traces the origins of the ideas behind the planning of the Western Garden Cities, to see whether some of these can be salvaged and put to use again in the 21st century.

In 1947, the architect Aldo van Eyck built his first playground in Amsterdam, on the Bertelmanplein. Many hundreds more followed, in a spatial experiment that has (positively) marked the childhood of an entire generation. Though largely disappeared, defunct and forgotten today, these playgrounds represent one of the most emblematic of architectural interventions in a pivotal time: the shift from the top down organization of space by modernist functionalist architects, towards a bottom-up architecture that literally aimed to give space to the imagination.